The Grand Final of the second TeenTech Awards has showcased yet again the fantastic ideas and inventiveness of young people. Thirty seven teams of finalists came together at the Royal Society to decide who would be the winners in eleven different categories. 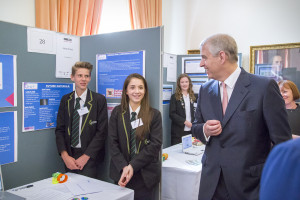 To raise the level of excitement still further we were delighted to have a visit from our Patron, HRH Duke of York KG, who was keen to meet the finalists. To our complete amazement , he visited every single student team to understand more about their innovations. The winners have been invited to Buckingham Palace.

Addressing pupils who had taken part in the Awards, The Duke  said: “If we don’t encourage young people to be interested in technology and the digital world and apply that knowledge then we are not going to be a rich country in the future.  All these projects you have undertaken are about problem solving and that’s what is needed in the real world. Thanks to TeenTech you are finding solutions to problems someone of my age might never have even considered. And the solutions you are finding could make a difference to a whole range of people, not only now but into the future.” 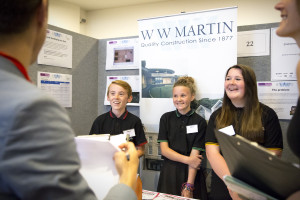 During the day students were thrilled to meet leading people in science and technology who were just as keen themselves to get to know the innovators of the future. Those who had the hard choice of choosing from amongst a very strong field included celebrities such as Dallas Campbell, Martha Lane Fox, Helen Czerski, Janice Long and Kate Russell.

Stephen Fry opened the ceremony before high fiving his way down the aisle . James May spent three hours listening to ideas and taking ‘selfies’ with the teenagers. 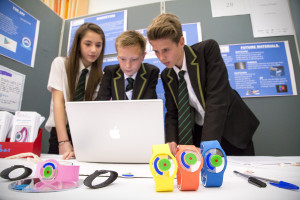 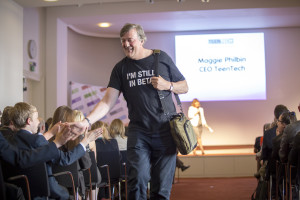 Birkdale School in Sheffield was crowned the overall winner for their idea to make cars safer by lowering the risk of slipping in bad conditions.  Max Doody and James Bradley, both 15, explained: “We’re both keen motorsports fans and were chatting about the cars in a maths lesson.  Our idea was that if a fan was used to suck the car down to the road, traction levels would be higher so in wet or icy conditions, the car would be a lot safer. “When we first started working on the idea in September, we drew a digital sketch based on the science behind it and have since been through lots of models and prototypes. We’ve been through a lot of trial and error.  Our school has an enterprise incubation centre called The Design Hatchery and we’ve already spoken to companies in the car industry for their advice.  After winning the TeenTech Award we’re now itching for the next step of commercialising the idea.  We’re looking for further partners in the auto industry to bring this to reality.” 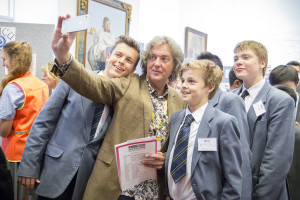 It was the generosity of our Sponsors which helped to make the day possible and they joined with our celebrity judges to do the hard work of deciding between so many terrific entries. A big thanks goes to National Grid, HP, Airbus, CPC, Equal Experts, Google, JVC, Atkins, Institute of Food Science & Technology, Cranfield University and OCR. 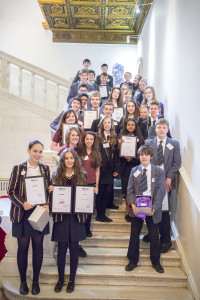 Richard Lander School – Maggie, Lauryn and Lauren for Playground Dynamo       Our idea is a play park that generates electricity and/or pumps water for rural communities in developing countries. This park would consist of a round-a-bout. a see-saw and perhaps a spinning swing. However we’d like to provide blueprints enabling the local community to source the materials cheaply from things like broken car parts to create a sustainable project.

Birkdale School- Aryan and Nelson for SecTec Our idea for keeping children safe online is a Browser/Mobile Application which runs in the background and pops up with an animated character to inform children about potential dangers.

Birkdale School – Maxwell and James for Ground Effect Fan By using electric fans to create a low pressure under the car and separately sprung skirts to maintain a set ground clearance, the system will increase the down force on a car. The car would thereby have increased grip, shortening braking distances and reducing the chance of slipping on roads. The purpose of this system is to make cars safer, not faster.

Loreto Grammar School – Sarah, Josie and Lucy for Echolocation Our idea is a device for helping the blind to get around. It uses echolocation, sending out sound waves like bats do. There is a small computer unit inside and this interprets the sound waves to tell the user whether there is a potentially hazardous object in around them.

This award has been judged across all categories with the aim of raising awareness of the importance and prevalence of programming and to encourage students to have a go and learn more about programming through their TeenTech projects. Birkdale School – Philip, Micha and Joshua for Deep Focus

Loreto Grammar School – Sarah for Dementiago         Dementiago is an anklet made from nylon with a waterproof coating which tracks someone with dementia through an app which family members and carers have. The anklet will also have a micro chip which can be scanned by emergency service personnel which tells them who the person is, their next of kin, age, address and any important medical information. The anklet will give people with dementia more freedom but will give family members and carers the state of mind that the person with dementia is safe.

Loughborough Grammar School – Patric, Harry and Matthew for S.P.E.A.R. Our idea involves the use of an app to quickly calculates distances and other statistics for sport. This innovation leaves more time to actually play and enjoy the sport. We hope this will encourage more people to get involved in sporting activities. The social elements in our innovation are also designed to make it more accessible to people as it comes with an app.

Sandwich Technology School – Joe, Lauren and Kaitlin for Flood Defence We chose to look at the environment and highlight problems that are occurring in today’s world and what impact it is having to us locally. We go to school in Sandwich which is by the coast and also sits next to the river Stour. Recently we have seen a lot of flooding and the town was put on red alert as the river was going to break the banks. Sand bags were quickly given out but as this is a very old town many homes got flooded. This got us thinking about what should be done to prevent this from happening in the future.

Loreto Grammar School – Sophie for Stepping Out Stepping Out is an application which gives teenagers indirect help and advice on their journey in to adulthood and which would enable teenagers specifically, but not limited to this group, to learn the art of being happy.

Notre Dame High School Greenock – Ellie, Claire and Ellie for Smart Wardrobe    Our smart wardrobe will have a small touchscreen panel on the side of the nearest wall on which a model of the user will appear along with a number of categories .e.g. tops, dresses, skirts etc. You will be able to choose one of these and select an outfit that you think looks nice on your model. Once you have chosen your outfit you select the ‘that looks good button’ on the screen and the wardrobe will collect and deliver the selected clothes.

The Hayfield School- Snap-Wrap We have developed an idea for a is a watch or wrist-band which tells you whether you have eaten your five-a-day.

We noticed last year that some teams had gone to considerable effort to build working models or prototypes and whilst this is not a condition of entry, we felt it was important to acknowledge the further step taken. This special Manufacturing Award is judged across all categories on the Awards day.   Hayfield School- Team Generation “Generation” Our concept is a portable Alzheimer’s aiding device.

TeenTech offer a special prize for the team who has collaborated well either with young people, experts or companies outside the UK Loreto Grammar School – Sophie for Stepping Out Stepping Out is an application which gives teenagers indirect help and advice on their journey in to adulthood and which would enable teenagers specifically, but not limited to this group, to learn the art of being happy.

Teacher of the Year Award

Birkdale School – Maxwell and James for Ground Effect Fan By using electric fans to create a low pressure under the car and separately sprung skirts to maintain a set ground clearance, the system will increase the down force on a car. The car would thereby have increased grip, shortening braking distances and reducing the chance of slipping on roads. The purpose of this system is to make cars safer, not faster.