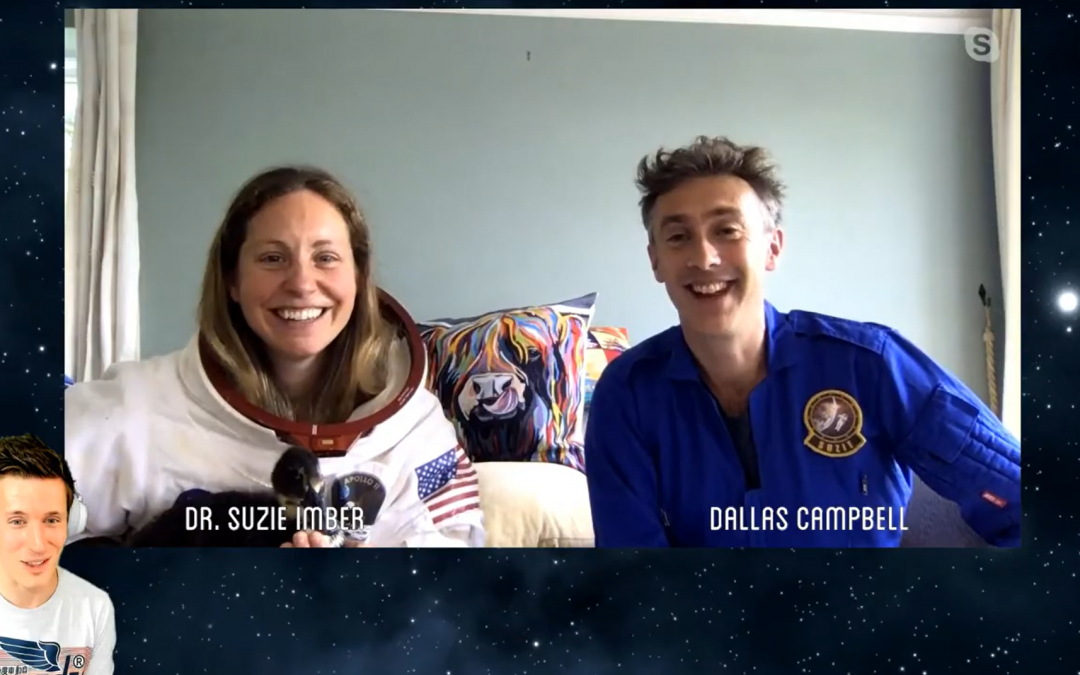 TeenTech always runs exciting Innovation days in conjunction with our sponsors, companies and universities. These offer our students insight into their industry and lots of inspiration and support for students who may be doing the TeenTech Awards.

Since March, we’ve moved these experiences to the virtual world and they’ve been even more powerful! Thousands of young people from all over the UK joined us and met leading people from across a wide variety of companies.

We kicked off our Summer of TeenTech with a very special Innovation Day at Home on the Future of Music. We were joined by Harry McVeigh, singer and songwriter for White Lies, and radio broadcaster, Janice Long.

We had interviews with the rest of the band, as well as crew members that work in sound design, lighting design and in merchandising to explore the history of the music industry and how technology has changed the industry dramatically in recent years.

We looked at the impact that COVID-19 has had on the industry too, and set the students the challenge of coming up with ideas on how to help musicians, crew members and fans during COVID-19 and to dream up innovations that could help move the music industry forward. We were inundated with ideas, from virtual gigs, to apps that help people with disabilities learn about venues and view additional information during a concert (for example, song lyrics for those with hearing disabilities).

Evolution of the Built Environment with Atkins

Sustainability goals are as relevant to the developed world as they are to the developing world with which we strongly associate them. Our Innovation Day with Atkins explored the evolution of the built environment in terms of innovation, fresh thinking and addressing the UN Sustainability Goals to make the world a better and safer place.

Students were tasked with coming up with a solution or an idea to make their surrounding area a better and safer place.

We had some wonderful projects submitted including marketing campaigns, paintings, architectural drawings and models. Each project was so thoughtful and Jo and Adrien from Atkins had some really insightful feedback for our students to help them develop their ideas further.

A career in acoustics opens up so many doors into a diverse range of industries. From making aeroplanes quieter to learning about our planet by listening to the oceans, acoustical engineers study sound and vibration all around us, to solve real-world problems and push future technologies.

Nikhil Mistry (University of Southampton) and Vicky Stewart (Atkins) joined us to talk about their careers, the science of acoustics and why sound is so important to us all. Our expert guests played some audio and video clips to illustrate the science involved and then challenged the students to document sound around their home and design something that would make a situation, a place or a space sound better.

Our experts were so impressed by the projects submitted which included ideas around beacons for alerting beach users and the RNLI of unsafe conditions, as well as emitting sounds to deter sharks and jellyfish, an idea for a jigsaw style wall panelling system for budding musicians practising at home, acoustic panels for large echoing halls which could be adapted for different uses and more.

We hosted a special Innovation Day at Home on the topic of Cybersecurity. We were joined by experts from BT who talked about the different types of cybercrime, from hacking to phishing emails, and offered tips and advice on how we can all stay safer online.

We set students the challenge of coming up with a marketing campaign to raise awareness on the issues that were covered. The students rose to the occasion, and we had a wide range of projects from billboard adverts, through social media campaigns, and even an animated television advert demonstrating how making simple changes to passwords can make them many times more secure.

For our two Game Design Innovation Days at Home, we were joined by BBC Click’s Kate Russell where we talked about the early days of the gaming industry and how immersive games can be for telling a story, evoking emotions from allowing you to be and relate to another character, and experience a story or a point of view first-hand. The session was focussed on getting students to think about how games are imagined and created and included topics of inclusivity and accessibility. We inspired students to think about what games might look like in the future, exploring physical devices that take gaming beyond computers and consoles, augmented reality, virtual reality, wearable technology and more. We were also joined by game composer Andrea Possee who talked about some of the creative roles in making games. Less than 20% of roles in making a game are in programming, so emphasising the creative roles such as musicians, artists, animators and games testers was really important.

We challenged students to think of ideas for their own game, and we were blown away by the level of creativity. We had a wide range of games submitted, including educational games, games with exciting new peripherals, story-based games that raised awareness of important issues, and more. The character and location concepts were so impressive too.

Virtual Reality and Augmented Reality with Rolls-Royce and Bloc Digital

We were joined by special guests from Rolls-Royce and Bloc Digital for a special Innovation Day at Home on the topic of Virtual Reality and Augmented Reality. We looked at how these technologies have really evolved to become mainstream in recent years, looking at games (such as Pokemon Go) and useful applications. We looked at how Rolls-Royce are incorporating both of these technologies into their workflow, and we thought about how VR and AR could help solve real-world problems.

The students were challenged to think of their own use-cases for VR and AR, tackling global or local issues, and we had some wonderful projects. Some of these were focussed around COVID-19 and allowing people to do their jobs safer, or experience things that are currently not possible. Others thought up ways to use these technologies to raise awareness of issues, help people with disabilities, or help people to assemble furniture! A couple of students even looked at evolving the technology itself to help you feel the things you were experiencing and increasing realism.

Dr. Suzie Imber (Associate Professor in Space Physics and winner of BBC2 series, Astronauts: Do You Have What It Takes?) and Dallas Campbell (broadcaster, speaker and author) returned for an Innovation Day at Home that covered space travel history, how astronauts train, what we eat and wear in space, and the BepiColombo Mission to Mercury!

During the session, we looked at the challenges of humankind becoming a multi-planetary species and the problems we would need to overcome if we are to live and work on a planet that is unlike our own. Students were set the challenge of creating something that would help us explore new planets.

For our Animation Week, we ran a session each morning focussing on a different aspect of creating an animation.

Our opening session was all about coming up with an idea and the pre-production process. We were joined by experts including Sanna (a storyboard artist from Aardman Animation), Karine (a film writer, editor and director), and Mike (a concept artist from Platinum Films).

We followed this with a session all about the production of animation and were joined by animator and visual effects artist, Dave Brain. We explored computer and mobile based tools with walkthroughs on how they can be used to film animations.

Our third session focussed on the post-production process and we looked at editing software, voiceover tools, and even software for adding special effects to our projects.

The students were then given some time to work on their projects, with support from TeenTech, ahead of a Showcase event on the Friday afternoon. Students, and their teachers, family and friends, were treated to a live broadcast of their projects, with some special tips from our experts on what they could do next if they enjoyed the project week.

We were overwhelmed by the number of entries and the creativity from all the students that took part. We had claymation projects, hand-drawn animations, 3D rendered computer animations, and more. Many projects were created to raise awareness on important issues, whilst others told a fun story in a really interesting way.

Our TeenTech Animation Showcase can be viewed on our YouTube channel.

For the final week of our TeenTech Summer programme, we ran a whole week of Coding Workshops. Each morning, we worked on coding projects, with an hour or so of workshop time, followed by a group Bug Bash.

On Monday we built some arcade-style games using a MakeCode, a block coding visual programming language. On Tuesday, we introduced the students to the micro:bit, an IoT computer which has lots of sensors. We created some really cool apps for the micro:bit including a dice, a spirit level, a thermometer, and more. On Wednesday, we took our learning further, building a game that we could then play on the micro:bit. On Thursday and Friday we moved from block programming to using Python. We began by revisiting the concepts of programming that we learnt over the previous days and translating them into Python, and then we built some cool apps in Python. On Friday, we even revisited the micro:bit and created some projects for that in Python!

Following each live workshop, we ran a group Bug Bash where students could send projects through to us live if they had encountered any problems. The host could then bring the projects up on the screen to show the solution to the problem. This proved to be such a useful exercise, as many of the mistakes were small, but common, so many students were able to fix their own projects through this shared knowledge.

The feedback from the week was wonderful, and we’re still getting emails from students now, keeping us up to date with how they’re getting on, and where they’ve taken their learning since Coding Week.

We had such a great Summer working with students and our industry experts. Thank you to everyone who took part! We’re now planning our upcoming Innovation Days! If you would like to sign-up to be notified, you can register here as a parent or student.

Register your Interest for Future Sessions

I just wanted to take this opportunity to say thank you for all your projects and work this summer. I have three children (14 years, 12 years and 9 years). All of them have gained a huge amount from your hard work. My eldest enjoyed the industry expert sessions, showing her the job possibilities within these industries. My son has found this week’s coding session an inspiration. He struggled with elements but being able to get support with this and daily recognition/feedback made such a difference and he really enjoyed it. He now wants to spend time learning more about Python coding. My youngest joined both the “City of Tomorrow” week and the Animation Week. She thoroughly enjoyed both and found seeing her work and others presented in the feedback sessions just brilliant. Ali, as the presenter, teacher and supporter in all the sessions, was so engaging and inspiring that they all thoroughly enjoyed it. On behalf of my whole family, THANKYOU. This has being a difficult time for us all and you have made a difference and a positive impact on many, many children. We look forward to hopefully being part of the next project.