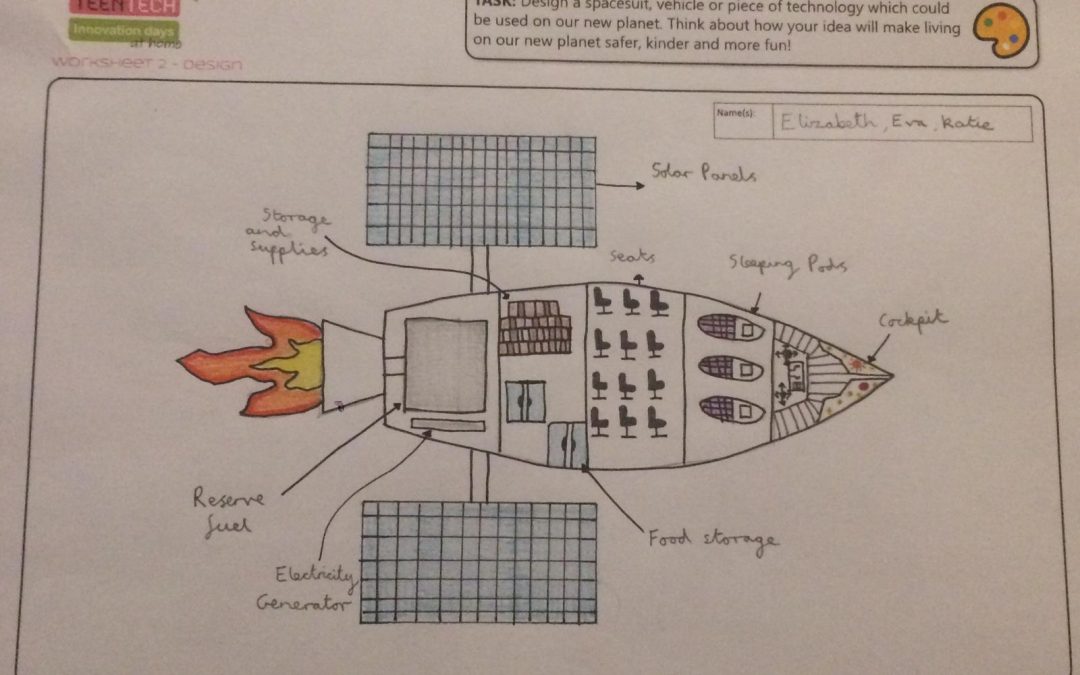 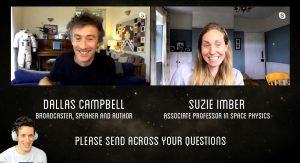 Over the past ten years, TeenTech has organised a large number of Innovation Days, where students come together and take part in challenges set by technology and engineering companies.

TeenTech has responded to the changing world with a comprehensive Innovation Days at Home programme, where students aged 11-18 can connect, virtually, with industry experts.

Last week, we were joined by Suzie Imber (Associate Professor in Space Physics and winner of BBC2 series, Astronauts: Do You Have What It Takes?) and Dallas Campbell (broadcaster, speaker and author) for an Innovation Day at Home that covered space travel history, astronaut training, surviving in space, and the BepiColombo Mercury mission!

We then set the students the challenge of creating something that would help us explore new planets. The students came back to us with a plethora of innovations, including new spacesuits, vehicles for exploring the surfaces of planets, and new types of instruments for gathering data on planets where humans couldn’t physically visit!

Many of the students focussed on designing a spacecraft for getting humans (and animals) into space!

Elizabeth, Eva, Katie (aged 12 from London) created a rocket that could transport a large group of people to a planet, and it runs primarily on electricity generated by solar panels (with a reserve booster that uses traditional fuel in an emergency).

As rockets use a lot of resources to build, we wanted to minimise the number of journeys needed to transport a significant number of people to the planet.

Meanwhile, Ineke and Niamh (aged 11 and 12 from Longstanton) designed a spacecraft to take farm animals and crops to Mars to help start a colony.

We were interested in this because people are looking to go to Mars and if they want to live there they will need to be able to farm crops and animals. Our idea used biomimicry to mimic the design of a fish when we designed our ship. There would be multiple ships so all the animals would not be close together.

Anya and Clara (aged 11 from London) created the ROK-BUS19, a different take on transporting a large group to a new planet.

This invention that we have created is powered by compost which burns creating fire. Even though the smoke is released it is eco-friendly as it travels high up in the atmosphere It has a compartment with 4 floors, so that as many passengers as possible can ride aboard. 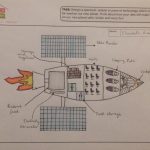 Elizabeth, Eva and Katie’s spacecraft for large groups of people 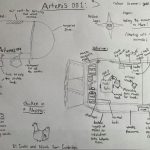 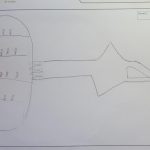 Anya and Clara’s spacecraft, the ROK-BUS19

Other pupils designed some spacesuits for future space travel.

Amirah (aged 12 from London) designed a spacesuit specifically for the exploration of Mercury after being inspired by the BepiColombo Mercury that Suzie has been a part of.

The most unique element is the magnetic boot technology. All terrestrial planets have an iron-nickel core. Mercury has the most iron out of all the planets. Both of these metals are magnetic and so, the magnetic boots would stop you from bouncing everywhere when you try to walk on the planet. Though the magnets would probably have to be really really strong.

Asha (aged 10 from Hampshire) also designed a spacesuit for coping with extreme temperatures.

I have considered many things that need to be avoided: overheating/freezing, a radiation wave, and that there is no gravity. I also considered that we need a device to gather information easily.

My idea is for a helmet for a spacesuit that uses plants and their ability for photosynthesis to convert CO2 into oxygen for use on planets, such as mars, where there is a lack of oxygen but an abundance of CO2. I was interested in this as it is mimicking how historically the atmosphere of earth evolved from something like what there is on mars. 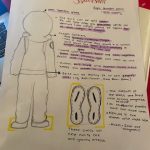 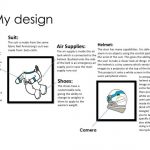 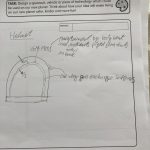 Beatrice (aged 12 from Ipswich) took the spacesuit idea even further, designing a spacesuit/swimsuit hybrid, complete with a beach bubble!

In the beach bubble you can be on a beach holiday on another planet. It is fun so is good for the mental health of our astronauts. 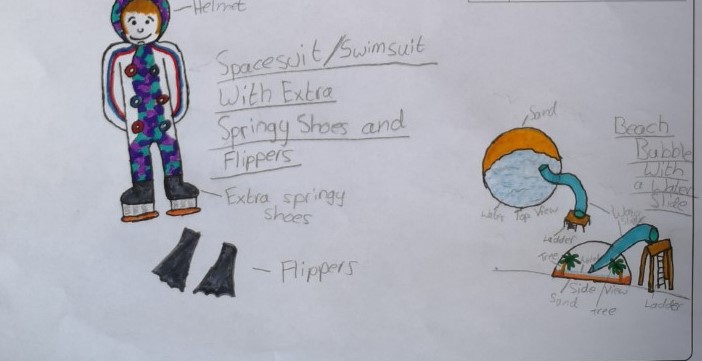 Malika (aged 12 from London) also came up with an idea for a spacesuit that helped astronauts stay in space longer.

I have designed a spacesuit that will make staying on the other planets safer. The suit will help reduce the loss of muscle mass and bone density which generally leads to deformation in astronauts. My suit does this by having a compression suit underneath the spacesuit which helps with blood circulation.

Evie (aged 11 from London) came up with the idea of a child-friendly spacesuit!

I have designed a child-friendly spacesuit with an alternate waistline for fitting, an oxygen tank, a communication device that comes with a screen to effectively FaceTime, and a tracking device so their parent or guardian can find them and it is very insulated.

Ahan (aged 12 from Hampshire) had an idea around turning CO2 into oxygen too.

My idea is for a spacesuit which transfers your carbon dioxide into oxygen, refuelling the oxygen. Also, it cools down the oxygen with the energy from the sun, with a mini air conditioner, so the suit is colder.

James (aged 7 from Sheffield) designed a spacesuit, especially for Suzie!

My spacesuit is especially for Suzie, as Suzie has helped me to enjoy space. It makes sure she is kept cool and warm as she would wear in on Mercury, and it has lights and allows her to move freely. 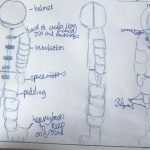 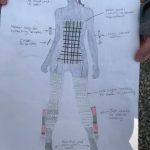 We had some great ideas for vehicles, and instruments to help us explore planets too!

Theo (aged 13 from Suffolk) thought about how we would need oxygen to survive on a new planet.

I have designed a unit that is mounted to the wall and it turns carbon dioxide into oxygen. There was the problem of how to power it. In the end, I decided that the best solution would be to have a solar farm on the new planet.

Annebelle (aged 11 from Kent) created a vehicle to allow humans a way to explore a new planet.

I have designed and made a ‘Space Hover Vehicle – I called it the Al 2020’ (in memory of Al Worden, as I wanted to take him to the Moon surface).

I was looking for a new type of surface all-terrain vehicle to be used when we return to the Moon, this would be for the collection & analysis of geological samples. The vehicle has it’s own drill and scoop for samples.

The Space Hover Vehicle incorporates a driving area, a living area with kitchen, bathroom & sleeping quarters and a small laboratory where they can beam back their results to the Moonbase. It is designed to work remotely and the Astronaut can work inside, free from any restrictions of a spacesuit.

Harry (aged 16 from Leicester) created a device around helping to keep astronauts healthy.

I’ve developed a device that takes blood samples and looks for signs of communicable and non-communicable disease. It then creates a treatment to the disease and dispenses it.

I was interested in creating this because I am doing Physics as well as Biology at A-Level and so I believed it was a way to bring the two together. 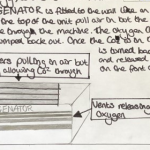 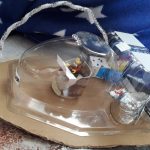 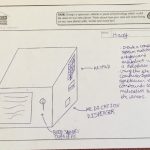 Kian, Elyse and Patrick (aged 15 and 16 from Hampshire) designed a mobile space base that could hover above a planet, asteroid or moon to help support a space mission. They even created it in Minecraft, and we were able to show a video of the project during the Live Feedback Session.

The base contains a garage complete with a rover to help with movability when exploring as well as living quarters to provide a comfortable place to sleep, a laboratory for scientists to study specimens that they have picked up and a high-tech bridge to manoeuvre the base around the universe.

The base itself is powered by a high-capacity ion engine that will provide energy for years to come as well as small propulsion engines to help it be more mobile. We were interested in creating this base as we thought about the plethora of challenges that occur during space travel and how we could reduce them.

The idea of a mobile space base would provide a good base of operations for any missions as well as still being comfortable and containing many useful features. 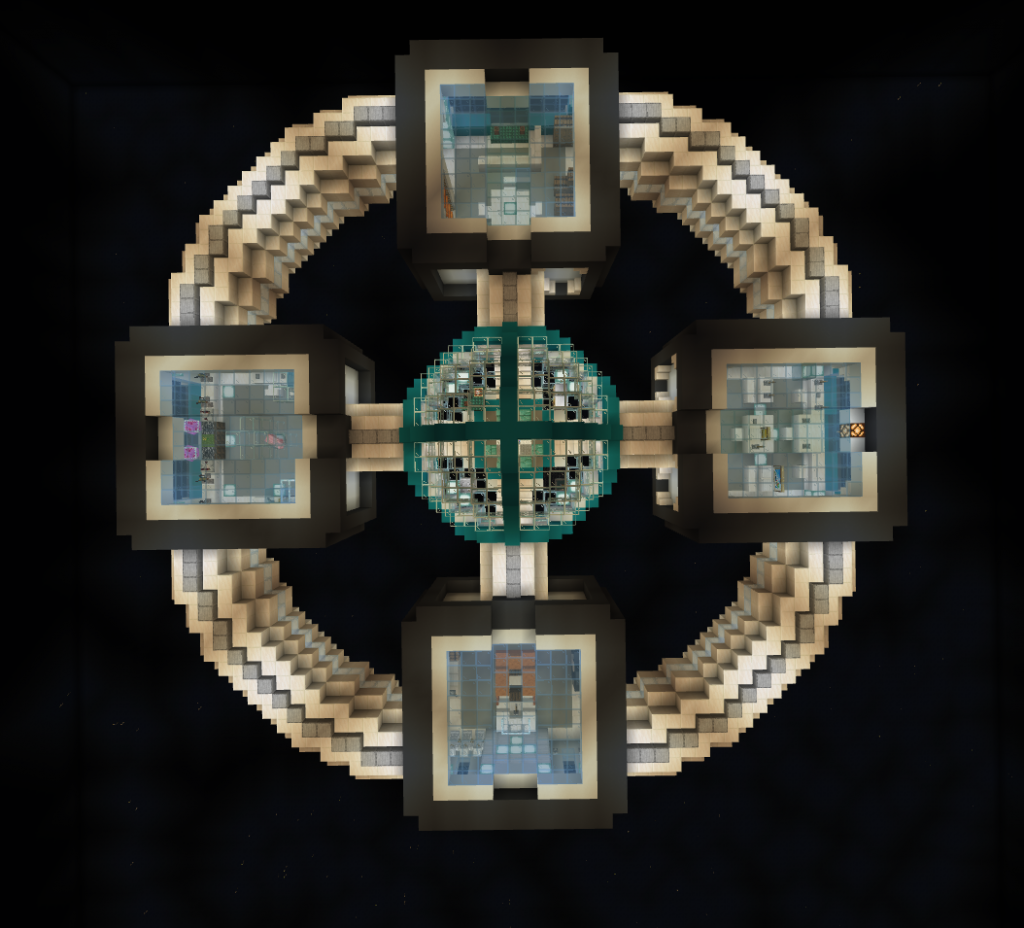 The problems that I had to face was how to breathe on the new planet so I decided to have an oxygen filter in the car for when driving and then when coming out of the car to wear a helmet. I also had to face that it might not all be flat land so I decided to do bigger wheels.

Abby (aged 11 from Longstanton) designed a drone to help us explore planets.

My idea is unique because it is encased in a clear plastic or glass bubble of Earth air to ensure it can fly. It has a camera attached to it which feedback live to whoever is holding the control panel, which also controls where the drone flies.

Chinedum (aged 12 from London) created a space base, with plants for the astronauts to grow for food.

I’ve made a way for humans to breathe while on another planet for a long period of time. It doesn’t require humans to do much to keep it running, giving astronauts more time to do research. It would teach humans to appreciate plants more, since they would have to take care of them to keep themselves alive.

Anushka (aged 15 from Hampshire) developed the idea of a space probe to help us explore and learn more about black holes.

I have developed an indestructible probe made of hard material and advanced technology to be able to locate black holes, how far away they are with sensors that are sensitive to very strong gravitational pulls and understand more about them. I was interested in creating this as black holes are more of a mystery than planets and we only have very limited knowledge on this topic. Furthermore, this can help deep space missions to be aware of the position of black holes and chart their course more effectively. 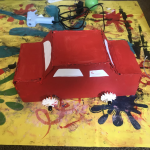 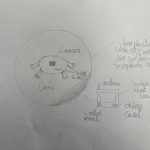 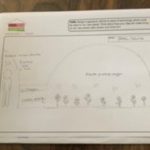 Our industry experts were absolutely amazed by the wide range of projects we received and the creativity of the pupils. We had drawings, presentations, digital creations and models. Each student focussed on a problem that we face and creatively thought of solutions using design, technology and engineering.

For a bit of fun, we also asked the students to pick one object from Earth to send out into space on a craft that, one day, might be intercepted by another civilisation. We had some lovely suggestions including favourite books, board games, pizza recipes, and more! 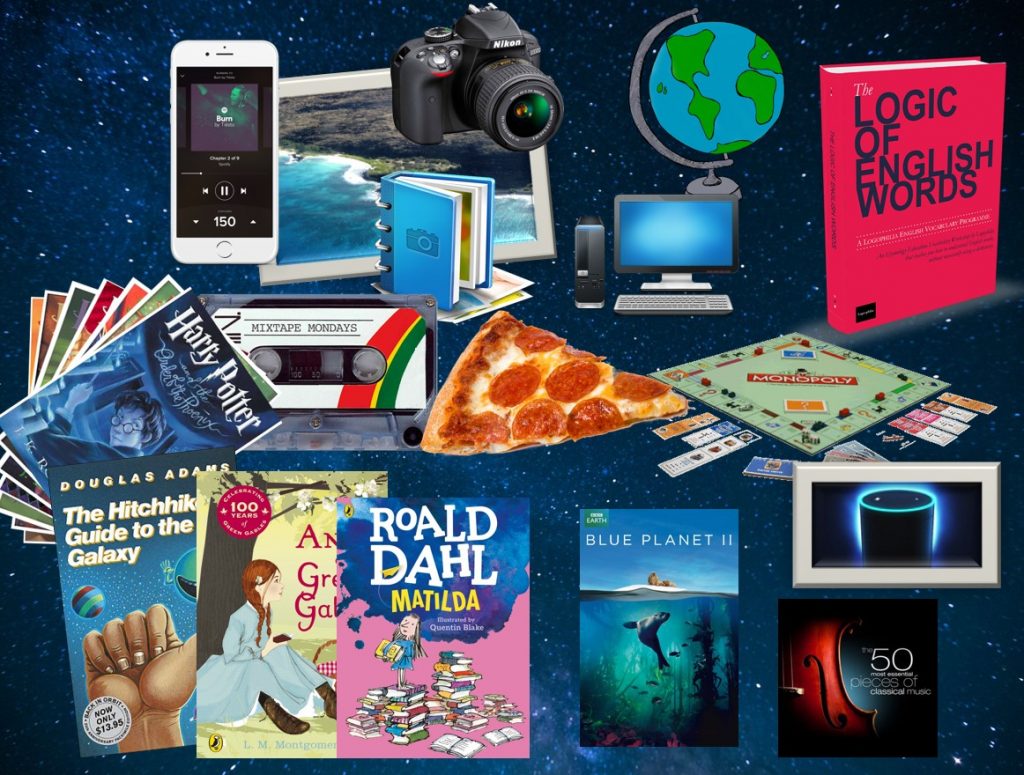 Thank you to everyone who took part! The entire week was an absolute joy for us, and you all asked such smart questions to Dallas and Suzie too! The way you took to the challenge was absolutely inspiring, and we look forward to seeing you develop your ideas further and be sure to sign up for the TeenTech Awards for 2021.

TeenTech’s next Innovation Day at Home is all about The Future of Music. You can learn more and register for the event at http://athome.teentech.com.